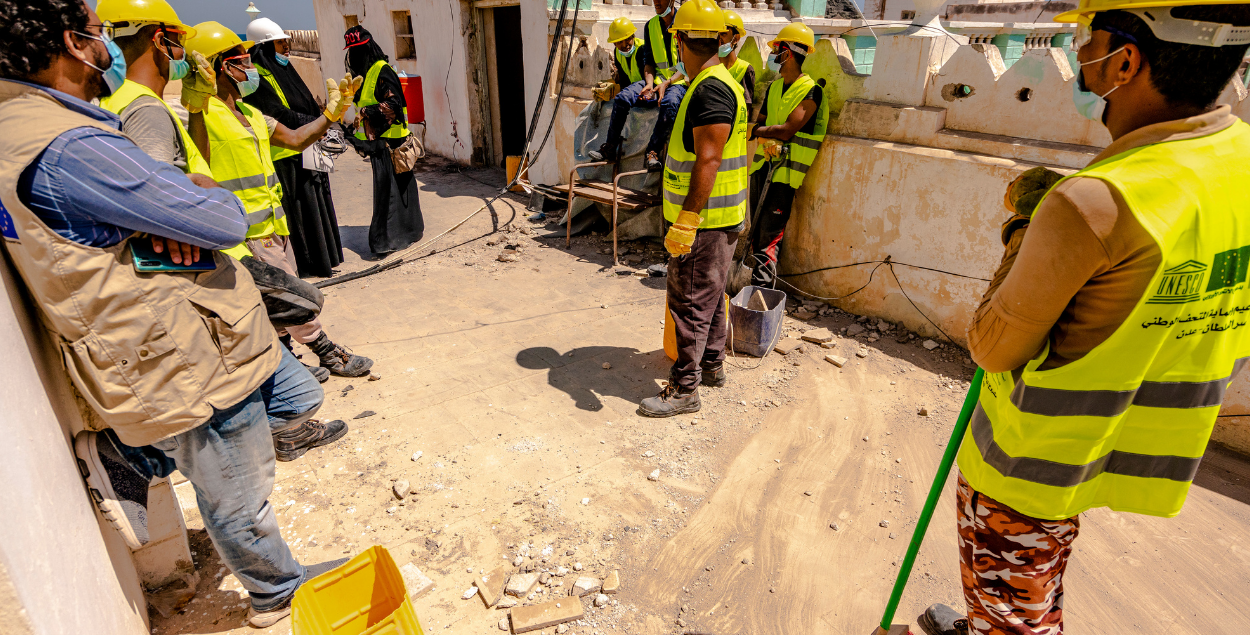 By Nicole McNeilly and Bart Hesseling

On 26 and 27 May 2021, around 1000 policy-makers, experts, creative professionals, cultural civil society organisations (CSOs) and academics met online to share knowledge and know-how about the landmark UNESCO-EU project Cash for Work: Promoting Livelihood Opportunities for Urban Youth in Yemen.

The key themes discussed by over 20 high-profile speakers and creatives during the Restoring livelihoods through culture in Yemen conference are summarised below, before setting out perspectives on next steps and future growth, in particular, emphasising the role of the EU in its close partnership with UNESCO.

Yemen’s seven-year conflict has led to poverty, an acute humanitarian crisis and multiple threats to cultural heritage. The cultural void caused by the conflict has caused disillusionment among young people, which in turn risks an increased likelihood of youth enrolment in the conflict. This theme was referenced by several panellists who emphasised the project’s opportunity to present alternative livelihoods to the war economy. Youth unemployment has been – even before the crisis – a significant challenge in the region (youth unemployment stood at 24% in 2019 according to the ILO). The project offered an opportunity for UNESCO and the EU, alongside the Social Fund for Development and other partners, to encourage ownership and valorisation of cultural heritage by young people and to demonstrate the role of culture in recovery in a conflict context. To this end, the project engaged 500 young artists and culture operators in professional development and training. The project’s emphasis on ownership and empowering young people is partly informed by the experience of the 2018 European Year of Cultural Heritage.

“Yemen is a place where artists have to push more than 20 times as hard as artists in any other country”, Asim Abdulaziz, artist, director, producer, Aden

An integrated and human-centred approach to culture in crisis

Reflecting EU priorities and UNESCO know-how, this project signifies a move away from a focus on ‘monumentality’ by prioritising urban architecture and community engagement. 70-80% of urban heritage are people’s homes. This focus on private houses and heritage in the public space echoes the human-centred approach of the project. 151 buildings were renovated and 8,000 historical buildings were surveyed in four cities. In addition, civil society played a major role in the protection of cultural heritage and the preservation of buildings in the old cities of Yemen. With programmes led by Yemenis for Yemenis, communities are brought together through shared efforts to solve common problems and to protect shared heritage.

The Yemen project marked the first application of the cash for work modality in cultural preservation efforts. It was described by invited panellists and partners as an empowering creative economic tool that fostered dignity by encouraging people to work rather than waiting for aid. In an already challenging humanitarian situation, programme implementation has had to cope with climate-related degradation and the COVID-19 pandemic.

For many in Yemen, daily wages are a main income source. As described by the Social Fund for Development on Day one, the project provided wages that supported sustainable livelihoods and complemented this with mechanisms to support people to encourage long-term saving. During COVID-19, however, those receiving daily wages were the most affected by the lock-down. Some partners stressed that for the sustainability of the initiative, cash for work needs to be complemented with economic activity like export and other mechanisms to lead to sustainable cultural heritage protection employment. There were several calls from the conference audience for the wider dissemination of knowledge and know-how about the cultural heritage cash for work modality so that it could bring value and be applied to other conflict or crisis contexts.

Mainstreaming gender in cash for work activities and cultural projects

The human-centred approach to the project created an opportunity for gender mainstreaming, focussing on the idea of equal pay for equal work. Of the 500 creative practitioners who gained creative entrepreneurial skills, 200 were women. Many initiatives have been designed to encourage female creative entrepreneurs to professionalise and see creative careers as a sustainable venture, which is timely considering the widening acceptance of women working beyond traditional fields like cosmetics and textiles. Challenges to ensuring equal participation of women in cash for work projects remain. These won’t deter efforts by the project implementers: the Social Fund for Developed informed the audience of the creation of i) a focussed team on gender issues,  ii) online gender training for those involved in project delivery, and iii) a gender checklist in the implementation of similar projects.

Heritage and cultural protection is worth the investment

The damage of Yemen’s rich heritage was described as a severe loss to humanity. In Yemen, UNESCO and the EU set out to demonstrate the role of culture for recovery, economy and peace. The Yemen project has created 500,000 working days and provided livelihood to 4,000 young men and women. The EU is stepping up its support to the Yemeni private sector and the ratification of the 2005 UNESCO Convention  by the Yemeni government is likely to open up additional opportunities for technical assistance, funding and support to the creative and heritage sector in Yemen.

2021 is the International Year of Creative Economy for Sustainable Development. The contribution of cultural diversity to the global creative economy and sustainable development goes hand in hand with increased investment in the managerial skills of cultural leaders and all people working along creative value chains. Strengthening the cultural and creative industries empowers artists to create a narrative that looks beyond the conflict to present ‘another Yemen’. With this in mind, the project’s next edition aims to build on monitoring and evaluation data to expand its scope to targeting rural areas where economic hardships are even more severe.

‘[…] we have many young Yemenis who are clever and creative who want to show the beautiful side of our country to the world, not only the negative side that the world knows us for because of the war. So, we ask UNESCO and all the organizations to stay supportive of us.’ Entesar Al-Duais, filmmaker, Sana’a

With an EU contribution of €10m, the three-year cash for work project in Yemen is a major component of the strategic partnership between the EU and UNESCO that has developed over the past decade. Numerous speakers emphasised the opportunities of partnerships with CSOs, the private sector and the diaspora with a view to strengthening the cultural sector’s post-conflict stability. The EU is about to adopt council conclusions on cultural heritage protection in crises. In this realm, multilateral cooperation and a multisectoral approach to culture have become a necessity. The EU strives for a closer examination of the links between peacebuilding and cultural heritage, including the imperative of do-no-harm approach in the cultural heritage context. The forthcoming EU Council conclusions on cultural heritage in crisis will be the next step in the international cultural heritage framework.

culture Solutions was invited to facilitate the conference and support knowledge dissemination that contextualised the Cash4Work project’s outcomes in broader developments around cultural heritage protection and EU policy-making processes.

Read in PDF
Cultural heritage Space for dialogue
Share:
We use cookies on our website to give you the most relevant experience by remembering your preferences and repeat visits. By clicking “Accept”, you consent to the use of all the cookies.
Privacy PolicyAccept
Manage consent