Between 17 and 20 September 2020, Amsterdam played host to this year’s Forum on European Culture. cultureSolutions collaborator Nicole McNeilly was at a selection of the events. She gives a short reflection on the event’s strengths and challenges.

Find out more on the Forum on European Culture – Festival We, the People 2020.

The four-day festival programme consisted of a mix of theatre performances, discussions, with much of the content live-streamed for an online audience. The first two days felt more professional-focussed – for example, with international delegates arriving for programmes led by Dutch Culture and taking part in visiting tours, and with events bringing professionals from across the creative sectors in blended digital and physical events.

During these first two days, we were able to share our freshly-printed Composing Trust report with peers from across the world. The Saturday and Sunday programme was designed more for the public. The forum explored many levels of identity, like gender, ethnicity, nationality, regionality and migration, through many media, like cooking, football, literature, music, sculpture, photography and film.

The opening performance, led by the company of the International Theatre of Amsterdam, set out the narratives threatening the European project, and made the audience aware of the structures that underpin the very concept and legitimacy of Europe. Yet, because of Covid19 this launch event was regretfully symbolic for the exclusion of the general public. Where was the outdoor festival? Where were the free tickets? The performance raised questions about the difficult to design creative formats that addressed the restrictions of the pandemic. How to make festivals more accessible and Covid-proof? How to bring people into events? As social movements and the zeitgeist turn to the people for legitimacy and inspiration, it felt that organising such events is still very challenging. Part of culture Solution’s work going forward will be to better embed a dialogue both with the general public and creatives. In our planning for the next edition of our Composing Trust report, we’re trying to make our brainstorming processes as accessible and representative as possible. 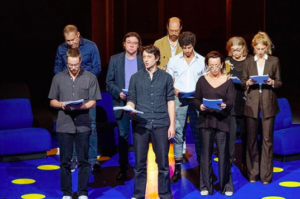 We the people – does a European demos exist?

This question underpinned the whole festival programme. Events like the discussion with celebrated author and historian Orlando Figes and the opening of Johny Pitt’s exhibition, Afropean, presented new, or rather, often forgotten, nuance to this story.

Europe is not a new story, and it didn’t start with the formation of the European Union. The concept of a European identity is much deeper than this. Our history has been full of shared connections, languages and relationships, often facilitated by the arts and culture as a vehicle for sharing. The printing of sheet music in the 19th century, for example, created a market- and demand-induced ‘European canon’. Impressionism betrayed national borders. Novels helped readers get acquainted with how their peers lived in other countries in Europe, and created a demand to know more about other nations and peoples, at the same as railways began to connect people much more easily. Yet despite the early 20th century cosmopolitanism and the European Union’s attempt to rebuild a consensus of a shared identity, Figes states that a European identity is unlikely to be anything more than an ideal. Yet culture has a central role in the formation of this aspiration. cultureSolutions was generated by the idea that culture has to be at the heart of Europe’s internal and external relations, but just like the festival showed us, the complexity of a European identity is something that must be continually borne in mind.

‘….Europe isn’t a closed box. It’s an open revolving door system, if you like. It will constantly refresh and regenerate provided we see Europe and Europeanness as something open…that’s not just white heritage that has to sort of be preserved, but it’s something that, for sure, must be based on certain European values. …the freedom of speech and freedom of assembly that enabled all those great artists that we claim as speaking for us as Europeans, that was the oxygen that they breathed’

Of course, the nuances of European, and a European’s, identity, can be simplified within this overarching framework. Yet it can’t flatten the many layers of identity that sit beneath it. This resonated with the recommendations from culture Solutions’ research on the need to pursue interculturally-aware cultural relations. And what came across in the debate of Johny Pitt, was that identity is often a choice. We find meaning in exploring the many layers of our identity. We may feel more at home in one more than another or several all at once. We can choose which layer(s) we articulate first (coming from Northern Ireland, this isn’t so strange for me), and how we talk about this.

We the people – what can we change (and what changed)?

The bigger question remains as to what the festival contributed to ongoing debates about Europe, culture and cultural diversity, and identity, tolerance, and acceptance. Dutch Culture programmed the third in a series of discussions about fair international cultural cooperation, this time focussing on language (a theme mentioned in our Composing Trust report). I was fortunate to be selected to attend this in person and left feeling inspired.

I am working with other participants on a separate manifesto on language and its use can create more equitable opportunities for exchange. The manifesto and the results of this group event will be published shortly via Dutch Culture.

For now, we ask the important question: Does a “European people” exist? This is just the continuation of a historic conversation whose eyes must keep looking forward to the future we all want for Europe. Within cultureSolutions, we’ll keep thinking about what the future of culture in European external relations looks like, specifically in an increasingly digitalised world, and we’ll get back to you to share our ideas on this later in the year.

You can watch many of the discussions and performances online. Festival ‘We the People’ was an initiative of Dutch Culture and De Balie, Amsterdam.

Views expressed in this post are personal. They cannot be considered as official culture Solutions’ position.