By Celia Zayas and Alexandra Gil

cS collaborators recently participated in the conference Colo(m)ialismes: Heritage and colonial memory in Barcelona, organised by the European Observatory on Memories (EUROM). Their intervention (see the video) questioned the link between colonialism and the EU integration process, as well as how EU external cultural action can be the perfect tool for mutual learning, collaboration and co-creation in a decolonizing process. These are some of their main conclusions.

The colonisation past of some EU Member States played a key role in the evolution of the EU integration process, and has undoubtedly impacted the current place of the EU in the world. However, does the EU benefit today from unequal power relations to build dependency links with other countries (that is, neocolonial or postcolonial relations)? [1]

Culture is an area frequently framed in terms of soft power, as a way to persuade and construct hegemony without coercion.[2] EU Cultural relations, when considered  a means for neo or postcolonial relations, are however intrinsically different from other international policies in their own nature. While in development, trade, security or energy the ownership of the object is frequently unidirectional (determining straight away the leverage of the partners), culture is not exclusive to the EU.

And this is done through the creation and modification of symbols, to which the discourse is central.

Cultural relations as a means for domination would be the result of the fictional attribution of a higher value to some cultures among others.

The European Agenda for Culture in a Globalizing world (2007) underlined the role of culture as a tool for soft power, but new developments have taken other directions. The Preparatory Action, of what would later become the Joint Communication of 2016, “Towards an EU strategy for international cultural relations”, acknowledged how EU external relations are still shaped by the colonial past, making third countries “feel uneasy with the dependency implied in the existing donor-recipient relationship“. The research report also called for a spirit of partnership built on mutual learning and exchange. However, did the Joint Communication build on this decolonial perspective?

Our analysis shows some preliminary results to be highlighted. First, It makes a significant effort in promoting intercultural dialogue and establishing dialogue with local stakeholders, but it does not refer to the weight of colonial history in these relations. Secondly, Cultural relations are framed as a tool for promoting a global order à la européenne, leaving the door open for mainstreaming a soft-power approach to all activities carried out as part of the EU Cultural relations, including culture for development and intercultural dialogue.

Thus, how can the EU develop a decolonial external cultural action? 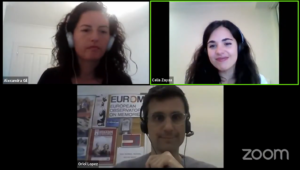 The EU must recognise that it is not a neutral actor, but it is part of power relationships, and leave room for listening to others and giving agency in the decision-making process. This can be done through intercultural strategies in international cooperation, meaning to involve local actors in all stages of cultural relations and to engage in a true equal-to-equal dialogue, in which cultural goods and services are equally valued. In this regard, the role of EU Delegations (EUDs) is absolutely essential. When involving local stakeholders and adapting the general policy frameworks to their contexts, EUDs are the front-runners in decolonising the praxis from the institutional culture.

In third countries, such an approach would have to be embedded in country-specific EU cultural strategies combining EU and Member States’ cultural priorities.

Although words are there, deeds are still missing. There is room for an ambitious multidisciplinary agenda (mixing historical, sociological, cultural and political approaches), exploring and developing knowledge, skills and methodologies to address, discuss and manage European colonial memories. Postcolonial relations lack a solid cultural dimension, and we firmly believe more cultural action would help improve those:

An integral approach to decolonisation could even work as a new push to the European identity narrative.

In this process, the arts as a tool for challenging representations and meanings are extremely powerful. If art pieces brought the “colonial gaze” to the European collective imagination, they are also a key space for decolonial discussion. They have been essential for re-writing colonial memories, for challenging stereotypical representations and for re-thinking symbols and meanings. Artistic creation gives voice, and the first step for decolonising is to start listening. Culture is a tool for social innovation and change, and if the EU is willing to engage in decolonising its praxis, culture can be the perfect scenario for mutual learning, collaboration and co-creation.